Profiling is a technique used to identify code-level performance bottlenecks in an application and tune application code accordingly. In the context of Web-based and multi-tiered applications, the profiling needs to be done in the Application Server/Middleware tier as most of the business logic processing is centered there. The focus of this paper is to briefly describe the components and process of profiling; share some practical challenges of integrating profiling tools with Java applications specifically; and suggest some options to overcome these issues so that profiling and tuning activities can be carried out effectively.

The term “Profiling” refers to understanding and analyzing an application's programs in terms of the time spent in various methods, calls and/or sub-routines and the memory usage of the code. This technique is used to find the expensive methods/calls/subroutines of a given application program and tweak them for performance optimization and tuning. Alternately, the amount of time it takes the code to run is also referred to as “Latency.” In typical multi-tiered applications; especially on the server side, it is called “Server-Side Latency”.

Profiling can also be used to get insights on the application in terms of memory usage -- such as how the objects/variables are created in memory provided by the runtime (JVM Heap, .NET CLR, Native Memory, or others) -- which can be further used to optimize the memory footprint of the applications. Also, for multi threaded applications, profiling can uncover issues related to Thread Synchronization and show the thread status as well.

The objective of this article is to enumerate some of the most common practical challenges in integrating Profiling Tools with Java/J2EE Applications (standalone or Application Server-based) and discuss workarounds that can help significantly reduce turnaround time required for profiling integration activity in the Application Performance Management process.

For instance, in a 3-tiered Web application comprised of a WebServer, Application Server and a Database server, let us consider an online business use case or business transaction that is taking more time to respond to an end user who is accessing it through a browser. In this context, the high end-to-end response time of the transaction could be attributed to Client Side Rendering, Web Server Request/Response handling, or Business Logic Processing on the Application Server or Query Execution on the Database Server. In order to find out the tier where the latency is high, profiling can be used to uncover where the server-side time is being spent.

Profiling can be broadly categorized into 2 types - CPU profiling and Memory Profiling.

CPU Profiling mainly focuses on identifying the high latency methods of the application code in Java context – it will provide the call graph for a given business process with the break-up of time spent in each of the methods. The method latency can be measured in 2 ways – Elapsed Time and CPU Time.

Elapsed Time is the time taken by a method. This includes the time taken within the method, its sub-methods and any time spent in Network I/O or Disk I/O. Ideally, the elapsed time is the duration between the entry and the exit of a method as measured by a wall clock. For instance, if a method involves the execution of business logic in Java code and SQL calls to a database (which is Network I/O), elapsed time shows the total time for all of that method to run.

CPU Time refers to the time taken by a method/function/routine spent exclusively on the CPU in executing the logic. Hence, it does not include the time taken for any I/O or any other delays from the Network or Disk I/O. For the same example mentioned above, CPU time does not show the time spent in database execution because that is Network I/O.

In general, it is the Elapsed Time which will be of interest; however, both halves provide quite valuable information about the application processing.

In extreme cases, the CPU time and the wall clock time can differ by a very large factor, especially if the executing thread has a low priority – since OS can interrupt the method execution multiple times due to low thread priority.

This section provides a generic architecture of a Profiling Tool. Typically, any profiling tool will have 2 major components – an Agent and a Console.

An Agent is also sometimes called a Probe or Profiler which is a component that will run on a server (typically an Application Server) where the code is deployed and running. The agent will be attached with the JVM whichcollects performance metrics using JVMPI/JVMTI interfaces and push the data to a pre-configured port on the host machine where the application is running.

A Console is a Java program which typically captures data from the pre-configured port and displays the metrics in dashboard view. This will be used to view the metrics and also capture Snapshots that can be used for offline analysis. The diagram below illustrates the profiler’s architecture in general. 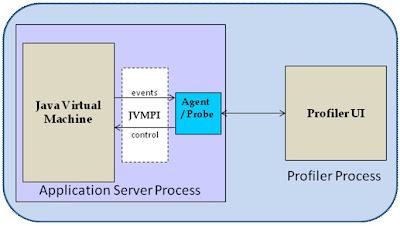 In the context of Java Profilers that need to be used with Java Application Servers/Java Standalone Programs, the Java Agent needs to be attached with the JVM so it can profile the application. This process is referred to as “Agent Integration” or “Profiler Integration”. This will be done by adding specific arguments to JVM in the Application Server’s startup scripts when invoking the standalone Java program.

The sections below are focused towards Profiling Applications running in Java based Application Servers.

In this section, I would like to present the practical challenges of integrating Java Profiling Agents with Java/J2EE Applications and Java Application Servers and suggest ways and means to overcome the issue so that profiling activity can be carried out effectively. These issues are broadly divided into several categories as illustrated in Fig.3. below. The various categories and remedies are discussed in detail in the coming sections. 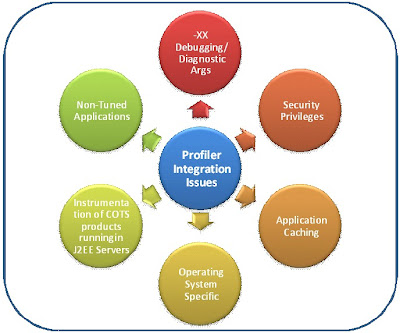 Integration of Java profilers with Java based Application Servers might not be stable or successful if the JVM arguments contain the –XX arguments, especially some of the “Debugging” or “Diagnostic” flags. It should be understood that JVM options that are specified with -XX are not stable and are not recommended for casual use. Also, these options are subject to change without notice.

Hence, an attempt is made here to list some specific –XX flags to look out for while integrating Profilers with Java Application Servers if any unexpected behavior is observed with Profiler Agents.

In certain scenarios, where the Application is not performance tuned or the business scenarios have high response time, attaching a profiler to some Applications (Application Servers) will cause time-outs and the Application Server sometimes could not even startup. This is attributed to the additional overhead profiling tools create due to byte-code instrumentation and the overhead linearly increases with the methods’ execution time causing the overall business scenario execution time to be even higher, resulting in time-outs.

The recommendation suggested for such scenarios is to identify the high latency code components “by introducing Java code in the application in order to capture the time taken in the crucial methods”. However, this approach has the disadvantage of choosing the critical/crucial classes and methods involved in a business transaction and instrument the logging statements which needs code change, code deployment.

The following is a code snippet that illustrates this concept:

//assuming the log utility being used for this as well

This section highlights the typical security or access privileges issues encountered while integrating Java profiler agents with Java Applications. The table below lists the issues and recommendations to overcome them.

For certain applications, where Caching is used (either Custom Caching or Distributed Cache Products) to improve application’s performance, profilers might not work as expected. This is attributed to the increased overhead of tracking and probing each and every object available in the Cache.

As some of the Profilers/Probes will have default instrumentation points for different layers like JSP/Servlet, EJB, DAO and standard Java Frameworks like Struts, Spring and ORM tools like Hibernate, even without adding any custom instrumentation points, the overhead will be very high if the Application under consideration uses huge object Caches.

In such scenarios, it is suggested to follow one of the options highlighted below:

Disable all the default instrumentation points that come along with Probe/Profiler and observe the application behavior in the context of Profiler.

Disable Caching only while profiling the application to find out any bottlenecks in the Java code and other layers such as the Database or external systems.

Alternately, Reduce the Cache Size so that impact of object tracking and probing can be reduced (this works in most cases since it is desirable to design any Cache that can be configurable in terms of its Size and Cache Invalidation Policies).

If the application that needs to be profiled has some COTS products that run in JVM process area, JVM might not startup when invoked with a profiling agent.

I would like to share my experience with one of the industry-leading Rules Engine product that is hosted in a WebSphere Application Server instance which could not be started successfully after integrating a java profiler. With the profiler, the application server used to crash showing an issue in Java CompilerThread in libjvm.so which is a JVM library. There is no sign of any error coming from Profiler’s libraries. Without the profiler, no JVM crash is observed at any time.

Ensure that the COTS product running in Java process does not have any probing or monitoring mechanism enabled by DEFAULT. If enabled, try to disable and run with the profiler.

Check if the COTS product is compatible with the profiler in use – Many a times, it’s quite difficult to get any documentation which can confirm the product’s compatibility with the Profiler. Hence, it is suggested to reach out to the tool vendor or COTS vendor to get required support.

In certain cases, the number of file descriptors set in UNIX based (especially on UNIX/SOLARIS/LINUX/HP-UX) Operating Systems will have impact on the profiling process.

Since profiling activity will load more libraries and binaries, application servers in the context of Probe/Profiler might not start up properly with less number of file descriptors

It is recommended to check current file descriptors limit (using ulimit –n) and increase the number of file descriptors allowed on the system higher. It should be noted that this is not a mandatory change required whenever profiler is to be used with an application, however, it acts as one of the checklist items in case of unexpected errors while working with profiler-attached applications.

In this paper, an attempt is made to de-brief the profiling process and highlight the practical issues in integrating profiling tools with Java applications. The issues and remedies discussed here are based on my experience with different Java profiling tools and Web-based and enterprise Java/J2EE applications and they will act as a checklist for performance architects/engineers that will help them resolve any profiler integration issues quickly and reduce the turn-around time in profiling activity.

Madhu Tanikella is a Technology Architect working with Cloud group in Infosys. He has around 10+ years of experience in Performance Engineering & Performance Tuning of client-server and Web-based software systems developed using Java/J2EE and Oracle technologies. He has specialized expertise in the areas of NFR Validation, WorkLoad Modeling, Performance Modeling, Performance Tuning, Capacity Planning and Hardware Sizing of distributed and multi-tiered software systems. He also has expertise in Cloud Computing and is certified in IBM Cloud Computing Architecture and is an IBM SOA Solution Designer. He can be contacted at madhubabu_tanikella@infosys.com