Cost, space and power will continue to dominate the agenda as Internet data traffic continues to grow between 50% and 60% per year. Indeed, for data centers, traffic could grow even quicker as cloud computing centralizes more computing resources and more devices are used to exchange data, such as mobile phones, tablets, TVs, etc.

As more computing resources are centralized, monitoring, analyzing and securing these resources become more important than ever. Yet network appliances today are typically single server implementations with few implementations providing more than one application. It is not uncommon to find several network appliances accessing a single monitoring location. For example, a typical scenario could be three appliances monitoring the same connection with one monitoring specific flows, another providing performance analysis and a third providing intrusion detection functionality.

Since cost, space and power are major issues for data centers, reducing the footprint of network appliances also becomes a major consideration. Many network appliances require all the processing power they can get and thus cannot share processing resources with other applications. Examples are 10 GbE Intrusion Prevention Systems or Application Performance Monitoring systems.

But, there are also a large number of monitoring, analysis and security appliances that run at lower speeds or do not require as much processing resources. Here, there are opportunities to consolidate these appliances into a single server.

If all appliances are based on the same operating system, it is possible to consolidate them using intelligent network adapters that can distribute data and share data between multiple applications. Such systems exist today.

However, if the appliances are based on different operating systems or environments or expect to have full control over available hardware resources, then an alternative solution is required. Virtualization can be used in such instances to consolidate these very different applications. A number of different solutions are possible depending on data sharing and distribution needs. The following describes various solutions based on VMware that can be used to consolidate multiple network appliances onto a single physical platform.

VMware Direct Path allows a virtual machine to control a physical network adapter. This allows existing network appliance applications to be transferred to a virtual environment: 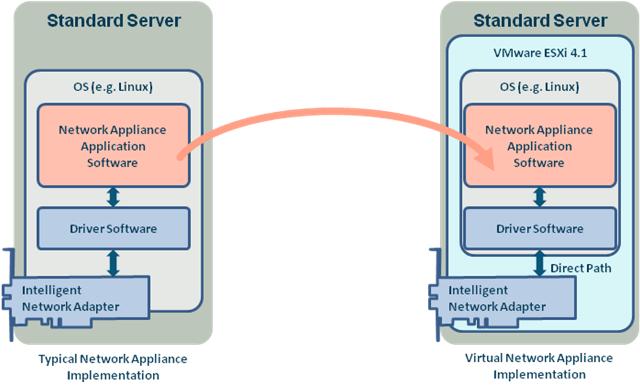 This is the first step in consolidation. To the network appliance application software, it still appears as if it is running on its own server with full control of the intelligent network adapter. The driver software has been updated to support VMware Direct Path, but otherwise, no changes need to be made.

With this arrangement, a consolidation can be performed for multiple network appliances: 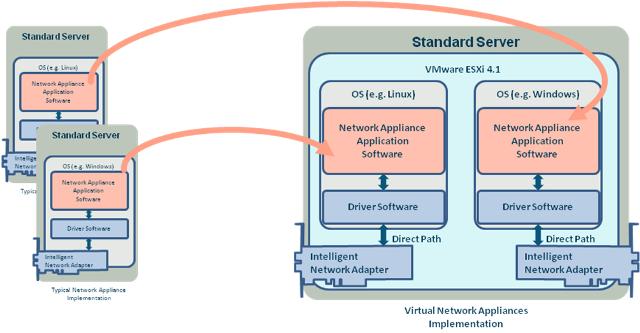 By distributing data within VMware, we can eliminate the load balancer and reduce the number of network adapters required. 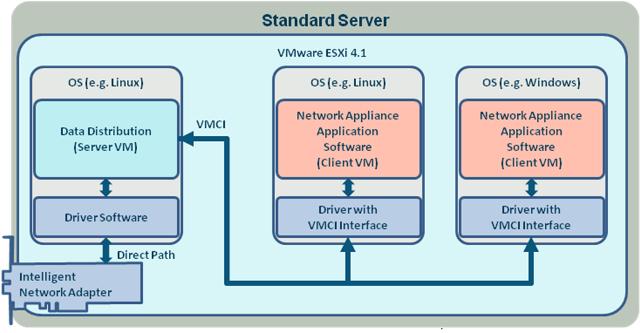 Distributing data on a per physical or virtual port basis

One method of distributing data to multiple client virtual machines is by physical port: 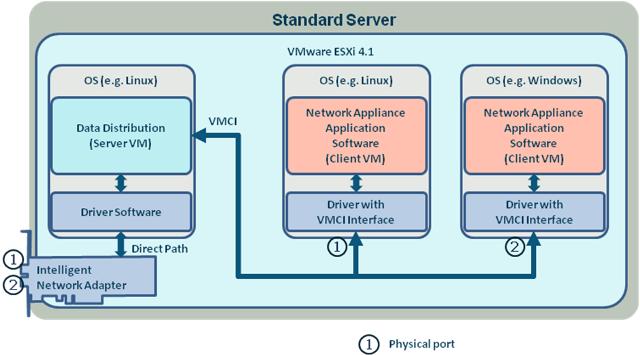 A more interesting solution is to use logical ports:

Some intelligent network adapters are capable of identifying flows and thus defining logical ports providing specific flow data. These logical ports can be mapped to VMCI ports allowing specific data to be distributed to dedicated network appliances running on client virtual machines. The number of virtual ports that can be supported is limited by the implementation on the network adapter, but can be up to 32. 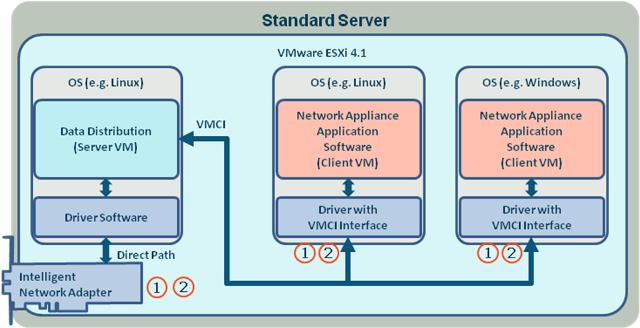 The data distribution virtual machine can be used to replicate the data captured by the intelligent network adapter to each virtual machine that requires that data. The only limitation is the bandwidth of the VMCI interface itself, which is dependent on the processing power of the supported CPU chipset.

Implementations of the setups described above have been made and have set a benchmark for expected performance. Napatech has successfully demonstrated that the VMCI interface can support up to 30 Gbps of data replication and distribution to multiple virtual machines. This allows any combination of port speeds and number of virtual clients to be implemented as long as the total consumed VMCI bandwidth does not exceed 30 Gbps.

As stated previously, not all network appliances can be virtualized, especially high-speed, high-performance appliances that require all the processing resources available. However, for less processing intensive appliance applications, there is an opportunity for consolidation that is compelling.

One of the advantages of using virtualization for consolidation is that each network appliance can be re-used to a large extent with the same operating system and environment. This also means that it is possible to upgrade the physical hardware without needing to upgrade the supported network appliance virtual machines. As physical servers continue to increase in power and performance, even more appliances can be consolidated onto a single physical server.

This approach can also be used to upgrade older network appliances supporting legacy operating systems or where resources to update the network appliance application software no longer are available.

Consolidation of network appliances is the last frontier of virtualization in the data center. Cost, space and power demands require that network appliances are as effectively and efficiently utilized as their application server counterparts. While many high-speed, high-performance network appliances already make optimal use of the server resources available to them, there are a number of opportunities for network appliance consolidation that can be exploited, especially as we move to higher network speeds and ever more powerful physical servers.