Difference between a column and row

The key difference between columns and rows is that a column arranges data vertically from top to bottom, while a row arranges data horizontally from left to right.

Rows and columns are different based on how they align data.

Rows and columns are common concepts in computer science and data analytics. These terms are also used in common parlance to describe the arrangements of everyday things.

The definition of a row is, “any set of objects or data that is aligned in a way that each one can be described as being to the left or right of another.”

Here are the top five differences between rows and columns in terms of how they organize data and objects:

5 examples of columns and rows

Sometimes a real-world example can drive a concept home better than a precise definition. Here are five examples of everyday objects people describe as being organized in a row:

Here are five examples of how the term column is used in common parlance:

Rows and columns and tables

The concepts of rows and columns becomes especially powerful when the two concepts are combined.

The periodic table sorts elements into rows and columns for comparison.1

A common pattern in spreadsheet software is to put a different date in each column, and list all of the days of a week or a month from the top of the spreadsheet to the bottom. Then in each row expenses or sales are listed corresponding to the date of the row. Spreadsheet software is then capable of performing various addition and subtraction functions to provide more meaning to the data.

Columns or rows in databases

Relational databases also rely heavily on the idea of columns and rows.

A combination of database columns and rows is knowns as a table.

Each database table row has the same set of data fields. For example, each row of a person table would include a first name, last name, date of birth and email address. All of the fields in a table row are said to make up a complete “entity.”

If you query every row in a table for a single field, such as the first name from the person table, the results return as a column of data.

The difference between rows and columns? For databases, a row usually describes the properties or fields of a single entity. A column will represent a field that is common to all entities, not just one.https://t.co/OJO2q2KU1c pic.twitter.com/BlG7o0dUJb

Choosing between rows and columns

Traditional databases, such as MySQL, PostgreSQL, DB2 and Oracle, were optimized for column-based access. This means data is accessed through a primary key, which is a unique value each row possesses. Relational databases are very efficient at column-based searches that extract unique fields of interest from a row.

However, many social media websites have found that row-based access is more efficient than access based on a primary key column. This has led to an emergence of popular NoSQL databases such as MongoDB, Cassandra, HBase and Redis. 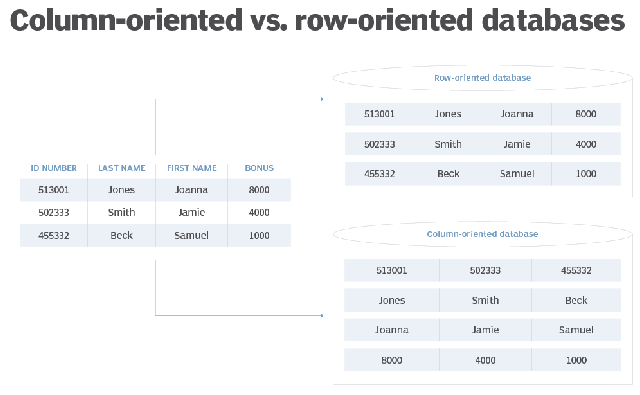 While the concept of rows and columns is prolific in the world of math, data analytics, chemistry and computer science, the concept is very egalitarian and permeates our daily life as well.

One can query rows and columns in a database, and deduce information from how elements are organized in columns and rows in a periodic table. At the same time, one can also admire a row of ducks as they swim by, and be humbled by the beautify of the Corinthian or Doric columns that hold up an ancient Greek building.