When you run your own executable command or shell script on Linux, you must prepend ./ to the Unix command. But why?

Why must you use a dot slash to run commands in Unix? You don’t have to do that in Windows with a batch file.

The Unix ./ script syntax mystery can be explained in three parts:

Unix’s dot slash vs the PATH

Every computer has an application PATH. This is a collection of folders in which the OS looks when an executable command or runnable script is invoked.

The problem is, if you’re trying to invoke a script your wrote yourself, it’s likely not saved in a folder that’s part of the application PATH. This means if you run your custom script like you would a command that resides on the PATH, the Linux OS won’t find it.

Meaning of ./ in Linux

One benefit of the dot slash notation is that the OS will find and execute your script or program more quickly, because the OS doesn’t search the entire application PATH first. On the other hand, it shouldn’t take much time at all to search the PATH on Ubuntu or SUSE.

The real benefit to the use of ./ to run scripts in Linux is that it avoids naming conflicts amongst commands.

Disambiguation and the elimination of naming conflicts are the key benefits to using ./ to run Unix commands.

For example, I create a script named javadoc.sh to generate documentation for my RESTful web applications. If an administrative user had added the \bin directory of the JDK to the application PATH, the OS would never find my command. Instead, it would first find the script named javadoc.sh which is part of every JDK \bin directory. My script would never run.

That’s why we always use ./ to run our scripts in Unix and Linux environments. 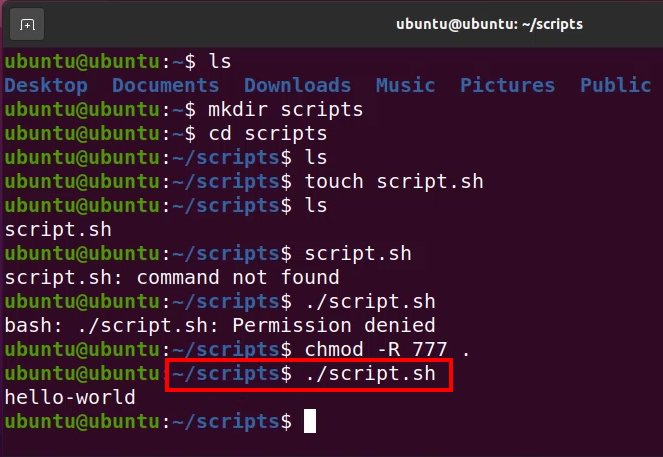 Use the dot slash to run scripts you have permissions to execute.

A word about permissions and running scripts

One last piece of advice, for anyone who is having trouble running a script or program of their own.

When you create a folder in a Linux distribution like Ubuntu, you only have read and write permissions, even though you are the folder owner. You need to explicitly give yourself execute permissions to that folder. Otherwise, when you attempt to run your command you will encounter an operation forbidden message — regardless of whether you use the Unix dot slash ./ command notation properly or not.