A container image is a template that defines how an image will be realized at runtime.

While containers started out as a Linux technology, you can create containers within the Windows operating system too.

The important thing to understand about Docker technology is that it has two main components: the client CLI tool and the container runtime. The CLI tool is used to execute instructions to the Docker runtime at the command line. The job of the Docker runtime is to create containers and run them on the operating system.

Docker images and the Dockerfile

Figure 1, below shows a simple Dockerfile. 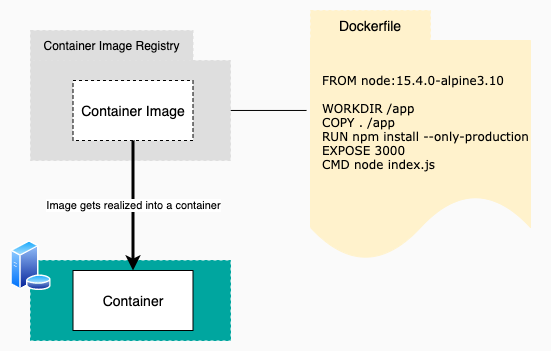 Compare the differences between Docker containers and images

The following is an explanation of each line in the Dockerfile.

Containers, images and the Dockerfile

The Dockerfile has instructions to declare a working directory, /app

Docker copies all the files for the application in the current directory of the developer’s file system into the working directory, /app.

The Dockerfile tells the Docker runtime to execute npm install in order to download the dependency packages that are associated with the application.

One of the features of a container is that it can expose port numbers that are special to the container and bind code to the given port number. In this case, the Dockerfil tells the runtime to expose port 3000.

Finally, the Dockerfile tells the runtime to start up the application by executing the command, node index.js.

To create the Docker image, you execute the following command:

To verify that the container is running, type the following command in a terminal window:

You’ll get results similar to the following:

The purpose of this piece is to answer the question, what is a Docker image vs. a Docker container? This brief explanation covers just the tip of a very big topic. The Docker website has a lot more information about the particulars of Docker containers and images as well as other topics of general interest.