Kubernetes (K8S) has become a very popular technology for working with distributed applications that run on the internet. K8S is intended to support an enormously large number of Linux containers that can run on hundreds if not thousands of virtual machines.

But, the power that Kubernetes provides comes with a good deal of complexity. An application running under Kubernetes has a lot of parts, which in K8S parlance are called resources and controllers. A resource is an object that serves a particular purpose. A controller is a piece of technology that manages the state of objects.

Kubernetes ships with a number of standard resources such as Pods, Deployments, Services, Namespaces, Secrets and ConfigMaps to name a few. There are others. Also, you can also create special resources that are custom to your use of Kubernetes. When you create a custom resource you might also have to create a custom controller to manage that resource.

Getting all these parts to play together nicely is a daunting task even for those accustomed to working with the Kubernetes. For the beginner it can be overwhelming. You have to know a lot even to create the simplest of applications.

Be advised that in order to get full benefit from reading this article you should have some background with Kubernetes in general and the standard Kubernetes resources in particular. If you need a brush up on the basics, you can view my video on YouTube here. Also, you can read this excellent introductory article about Kubernetes on TechTarget here.

So, assuming that all you have the basic background knowledge, the place to start is by answering the essential question, what is a Kubernetes Operator?

What is a Kuberenetes Operator?

A Kubernetes Operator is a technology that’s intended for encapsulating, deploying and managing a Kubernetes application.

Kubernetes Operators simplify application management by encapsulating the breadth of tasks required to create and manage a Kubernetes application into a single methodology. Instead of developers having to declare a whole bunch of Kubernetes resources to construct an application, in many cases all they need to do is work with the single custom resource that ships as part of the operator. That single resource can represent a template from which an application can be realized. You can think of the operator as a blueprint from which you’ll implement a full-fledged application within the cluster.

The process is very similar to how a developer creates an instance of any other resource in Kubernetes. When the resource is a standard resource such as a pod, a service or a namespace, or whether the resource is a customer resource, the configuration and invocation processes are pretty much the same.

Now that we have the theory out of the way, let’s move on to actually using a Kubernetes Operator.

How do I use a Kubernetes Operator?

Kubernetes Operators has matured to the point where there is now a public repository where a company or open source project can post their Operators. The repository is called Operator Hub and can be accessed at OperatorHub.io. As of this writing there are over a hundred companies posting operators on Operator Hub.

The benefit of OperatorHub.io is that it provides Operators the work “right out of the box.” Developers can create an application based on an operator without having to go through the complexity of crafting an Operator from scratch. Analogically it’s the difference between making a pizza from one bought in the freezer case at a grocery store as opposed to making a pizza from scratch. You can think of an Operator as the frozen pizza.

In the demonstration I am going to show you how to create a database application using a Kubernetes Operator that is stored on OperatorHub.io. In this case we’ll use the Mariadb operator. But, before I go into the specifics of using the Operator, I’ll create an instance of a standard Kubernetes resource in order to give you a sense of the similarities between a standard resource and a custom resource as published by an Operator. The standard resource I will use is a Pod.

Take a look at Listing 1 below. It’s an example of a Kubernetes manifest file for creating a pod in a Kubernetes cluster. How do we know that the manifest describes a pod? Take a look at the second line. Notice the statement, kind:Pod. The declaration tells Kubernetes to create a resource of the kind: Pod.

Listing 1: The manifest file for creating a simple Kubernetes Pod that has an nginx container

The resource will be created and the resulting output will be like so:

We’ve used a manifest file to create a Pod. Now let’s see how the pattern applies to working with the Kubernetes Operator.

As mentioned above, we’re going to demonstrate how to work with a Mariadb Operator that’s available on OperatorHub.io. The Operator is available at https://operatorhub.io/operator/mariadb-operator-app. (See Figure 1.) 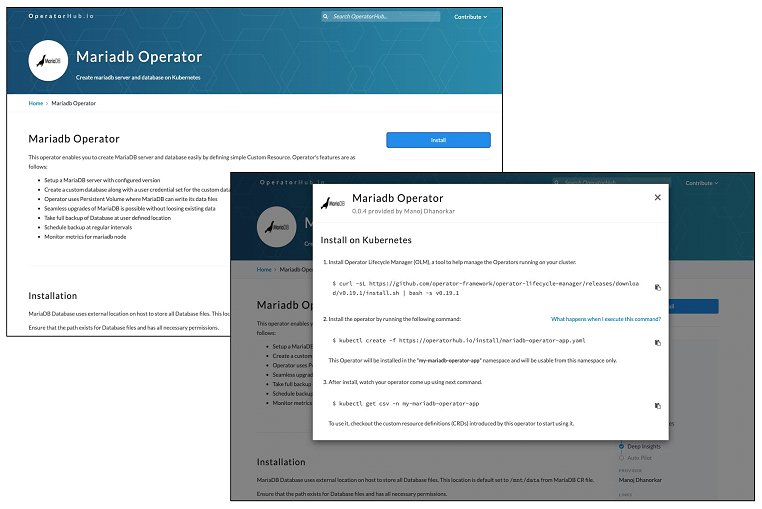 Figure 1: Mariadb is one of the many Kubernetes Operators available on OperatorHub.io

Installing the Operator is a two step process. First we install the Operator Lifecycle Manager (OLM) which is a tool that extends Kubernetes in order to support installing, managing and upgrading Operators running on a particular cluster. To install the OLM, execute the following command in the terminal you’re using to work with your particular Kubernetes cluster.

Next, we’re going to inject the actual Mariadb operator in the cluster by executing the following command:

Notice in the above that the yaml file that describes the Operator is hosted on OperatorHub.io. This makes sense because OperatorHub is the central repository for the Mariadb operator.

Upon creating the operator you’ll see the following output:

Having executed the installation command shown above, the operator is now ready to go. But at this point it’s important to understand that there is no actual instance of Mariadb running. We’ve only created the custom resource and other related artifacts that are required for the MariaDB operator. We have not created the Mariadb application. In order to create the Mariadb application we need to create a manifest file such as the one shown below in Listing 2. In this case, we’ll name the manifest file, mymariadb.yaml.

Listing 2: A manifest file for creating a running instance of Mariadb using an operator installed in the Kubernetes cluster.

Take a look at the second line in Listing 2, above. Notice the statement, kind:MariaDB. Look familiar? If you refer back to Listing 1, you’ll remember that the entry that defined the resource in the manifest file for the pod, was kind: Pod. In this case, in terms of the Mariadb operator, the resource is defined as, kind: MariaDB.

In order to get the application associated with the Operator up and running we execute the following command:

You’ll get the following output:

As you can see, we implemented an instance of the Mariadb resource in the same way we implemented the Pod resource. The invocation pattern is identical.

Of course, the specifics of the manifest files are different. The Pod needs to know the Linux container image to use as well as the port on which the container runs internally. The MariaDB Operator declares other attributes such as the username, password, and rootpwd, to name a few.

There’s a lot of work that goes into creating a Mariadb application without the aid of an Operator, more than simply spinning up an instance of a Mariadb container. There’s storage, network, storage, security as well as a number of other settings that might need to be configured. Also, I’d need to create a Kubernetes service to expose the Pods running Mariadb. Fortunately, all this work goes away when using an Operator. The benefit is apparent.

Putting It All Together

Kubernetes Operators are an important step in the evolution of the Kubernetes ecosystem. They make it so that any application can be encapsulated for reuse and then deployed on demand within a Kubernetes cluster. Also, Operators make maintenance and upgrade activities a lot easier than the manually provisioned counterpart.

But, as with anything that has to do with Kubenetes, Operators are complex. It takes time to learn how to use them and much more time to learn how to make them. But, given that they alleviate a lot of the burden that goes with creating applications that run under Kubernetes, the time required to master Operators is an investment that will yield significant returns in the long run.