The days of J2EE are behind us and—as of March 15, 2011—the Java EE 7 specification has full JSR support. That makes it about time to see just how far the Java specification and the tools that support the spec have come with regards to the development of Web services.

Since the new NetBeans 7 is currently available for download, I figured I’d give it a download and do a quick install. I should also mention that I have almost no experience with NetBeans, being an Eclipse and Rational Application Developer aficionado for the past five or six years, so I’m definitely not expecting any smooth sailing.

Web services were always floating around in the background and we were always pushed towards building a "service-oriented architecture." But most of my work with developing Web services involved simply creating Stateless Session EJBs using WebSphere Studio Application Developer and then clicking a wizard or two that would generate all sorts of magical WSDL and other XML files that made them invokable by a client application somewhere.

Once installed, the File > New Project option just screamed out to me, and it was pretty obvious that I wanted to create a new "Enterprise Application." 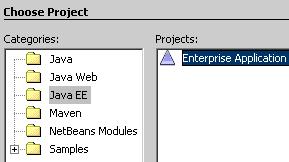 When prompted for a name, I used the incredibly uncreative name of MyEnterpriseApp, which caused a correspondingly named EJB and Web module to be created. The other nice thing about this particular stage in the development process was the fact that NetBeans automatically associated the project with GlassFish 3.1 which was automatically installed with the installation of the development tool. 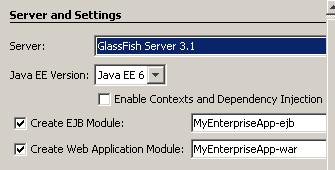 The projects window that appears is a tad intimidating, as it really doesn’t provide too much insight into exactly where you would create a Web service.

However, my experience with J2EE Web services is that they were nothing more than EJBs wrapped up in all sorts of special Web service decorations, so digging into the EJB folder of the projects tree seemed like a good place to start. Sure enough, by following the context menu of the EJB module, I was led directly to an option to create a Web service.

When you finish the wizard, a basic hello world type of method is provided for your perusal. It looks innocuous enough, and I’m assuming that if the tool generates it for me, it should work, so I’m going to leave it in there as an insurance policy for when I get around to testing my new Web service.

What I really want to do is add in a new method that can be used by any Rock-Paper-Scissors type of application. Basically, I need a service that when provided a String such as “Rock”, “Paper” or “Scissors” that a result of win, loss or tie, and perhaps even failure, will be returned to the calling program. That means adding a new method to the Web service.

I actually tried a few different ways of adding methods to the NetBeans generated Web service, but I don’t think the various steps I tried created the proper entries in various WSDL files or whatever. To properly add a new method to a Web service, the best option is to use the Add Operation wizard that is available from the context menu when you right-click on the Web service in question: 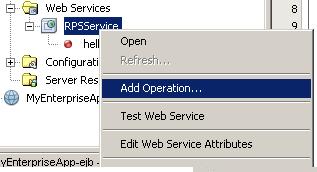 With the Add Operation wizard invoked, you are given the opportunity to provide a method name, a return type, and any arguments the method might require. 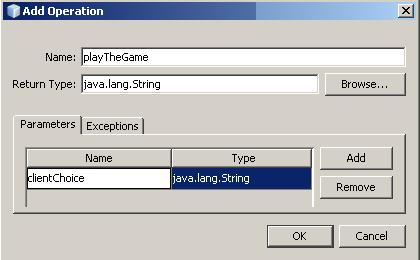 Completing this wizard adds a basic method stub into your Web service class, but the real coding is left up to you:

So, here’s the improved and updated playTheGame method with the required logic to play a simple Rock-Paper-Scissors game. Notice that for the sake of simplicity, the server always chooses Rock.

So, the basic Web service has been created. However, the question that is begging to be asked is "will it work?" Which brings us to the point of testing it. 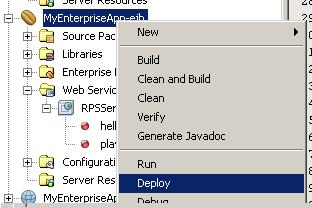 With a little “Build Successful” message cheering me on from the console window of NetBeans, I simply right-click on the Web service and select “Test Web service.”

Within seconds, a new Chrome browser window pops up asking me to test either of the two methods that are associated with the Web service, which includes the simple method that the tool generated for us by default, and the playTheGame method we coded ourselves. 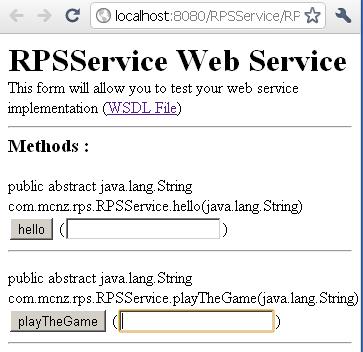 When we play the game, with say Paper, we get the expected result, which is a win for us and a loss for the server. Here’s how the response is formatted in the browser by the test engine: 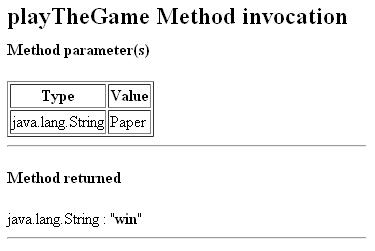 And what’s also interesting is the fact that both the SOAP request and response packages are displayed for our viewing pleasure, just so we know exactly what’s going on during the Web service interaction:

That’s it. That’s how simple and easy it is to create and test a basic Web service using the next generation of NetBeans, version 7.