One of the ongoing challenges DevOps professionals face when developing continuous integration workflows that integrate with disparate systems is how to protect that passwords, secret keys and tokens required to authenticate against them. That’s where the GitHub Actions secret comes in. It provides a secure vault to store your confidential information, and a simple mechanism to access those secret tokens in your GitHub Actions scripts. 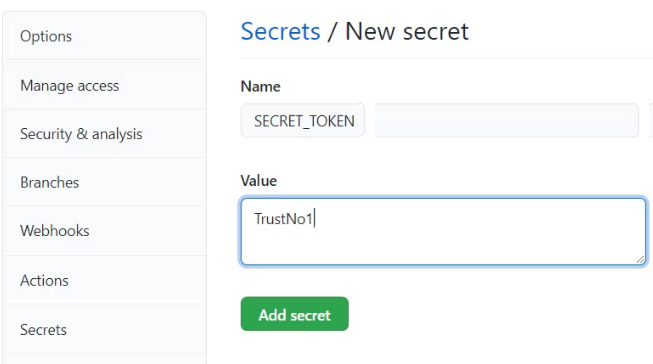 Within your GitHub Actions CI/CD pipelines, simply prepend the word secret before the name you assigned your passphrase, and escape it as a YAML variable, and the GitHub Actions secret will be passed to your scripts.

Here’s how a reference to a GitHub Actions secret would present itself in a YAML build file:

You can find the full  YAML file for this example on GitHub.

Given that fact that a developer could lose their job and possibly be sued for millions of dollars if they ever logged the actual text of a password, it’s good to know that any attempt to print out or log a password in a GitHub Action will fail, and only a masked set of asterixis will be output. For testing and evaluation purposes, you might want to see the GitHub Actions secret value. You can achieve this by manipulating the text and streaming the manipulation to the log. Again, this could get you both fired and sued if this ever made it to production, but for educational purposes, here’s how to do it

In summary, here are the steps to take if you would like to use a GitHub Actions secret in your continuous integration workflows:

Follow these steps on how to use a secret GitHub Actions token, and you’ll be able to seamlessly integrate with other systems, without any fear of exposing your passwords to the external world.