Kubernetes is a container orchestration technology created to help organizations run large applications on the internet. It has lots of moving parts and a broad scope of operation. It’s also famously difficult to understand and implement.

Nevertheless, Kubernetes’ complexity has created a demand for those who can work with it effectively, particularly developers. If you know how to sling code and you know Kubernetes, chances are you can get a job of your choosing.

Still, you’ll have to get through the technical interview to get the job you want. Part of the interview process will involve answering question specific to hands-on experience working with Kubernetes.

The Kubernetes interview questions that follow go beyond the typical rudimentary inquiries, such as “What is a pod?” and “What is a service?” This article assumes that you can answer those questions. Instead, these technical questions are designed for developers applying for positions that require a more advanced understanding of Kubernetes, to demonstrate their hands-on working knowledge of Kubernetes and container orchestration.

These questions just scratch the surface of working with Kubernetes beyond rote usage. But, being able to answer them is a good way to move onto the next step in your career as a Kubernetes application developer.

Below is a manifest file that declares a Kubernetes deployment and a Kubernetes service. What’s going wrong with it?

A service binds to a pod through a label match between a service selector and pod. When a service starts up, it “looks for” pods in the cluster with labels that are declared in the service’s selector field.

Figure 1 below illustrates the problem that exists in the manifest file above. Notice that the service in the figure below shows a Kubernetes service that has the selector values type=example and color=blue. Yet, the labels field of each of the pods in the Kubernetes deployment have the values type=example and color=red. The values in the service’s selector field and the pods’ labels fields do not match up. Hence, no binding. 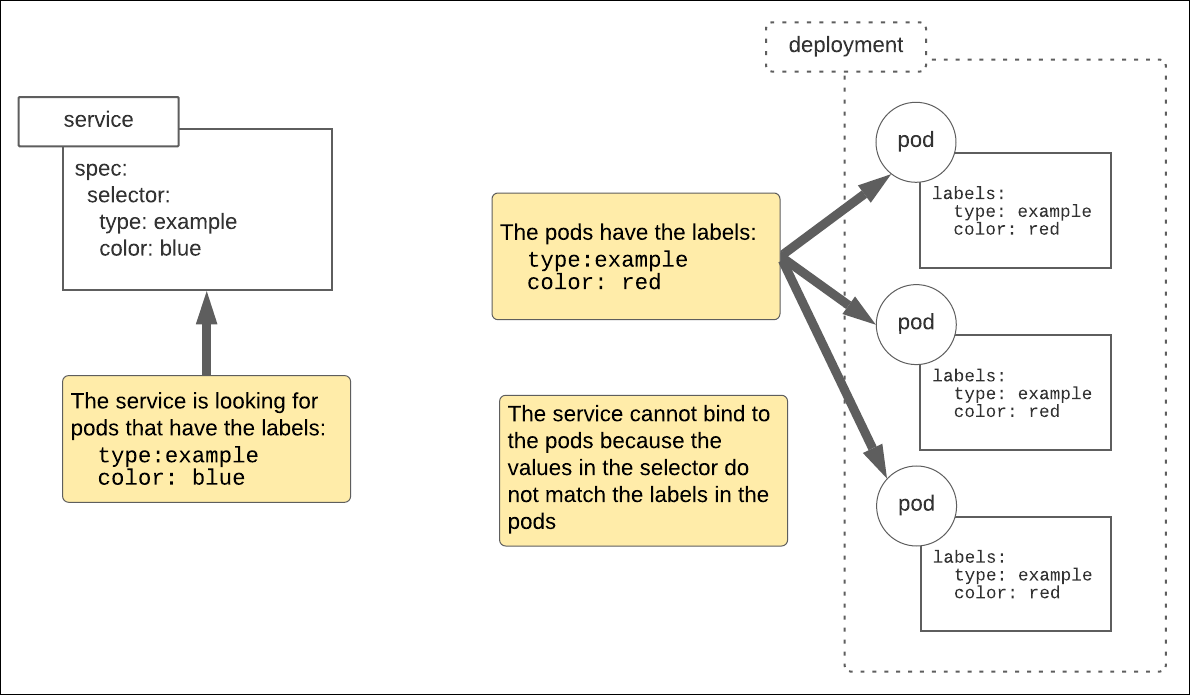 The values in the service’s selector field and the pods’ labels fields do NOT match up. Hence, no binding.

To bind Kubernetes to the existing pods, change the values in the service’s selector field to type=example and color=red.

What is an init container and when would you use one?

What is a Kubernetes operator?

A Kubernetes operator is a design pattern to package, deploy, and manage a Kubernetes application. Think of an operator as a way to create and deploy all the Kubernetes resources that go with an application at once using automation.

For example, an operator creates a Kubernetes service, the backing pods, the storage volumes as well as the Roles, and RoleBindngs, and all the configurations that are part of an application that runs on a Kubernetes cluster.

There are Kubernetes operators for MySQL, Oracle and Redis to name a few

How do you implement service discovery internally in a Kubernetes cluster?

Kubernetes comes with an internal DNS server that automatically assigns DNS names to the services it creates. These DNS names are accessible from pods within the cluster.

The format of the DNS name is:

However, if both the service and the pod calling the service are in the same namespace, the calling container within the pod can use just the service name as the DNS name (see Figure 2 below).

Figure 2: Kubernetes has a DNS server that creates DNS names accessible within a cluster.

For example, imagine you have a service, called myservice, in the namespace called mynamespace. The service myservice represents an HTTP web server.

To call the service myservice from a container in the pod yourpod, using curl for example, you would use the URL http://myservice.mynamespace. Why? Because yourpod is in a different namespace from myservice.

What is the purpose of kubelet?

The purpose of kubelet is to realize containers on a given Kubernetes node. Every node in a Kubernetes cluster has a running instance of kubelet.

When Kubernetes needs to create a pod(s), it identifies the node where the pod(s) can be created using Scheduler. A message then gets sent to the kubelet instance on the identified node. Kubelet in turn works with the container runtime interface (CRI) to create the container(s) for the pod(s). Figure 3 below outlines how these processes work together. 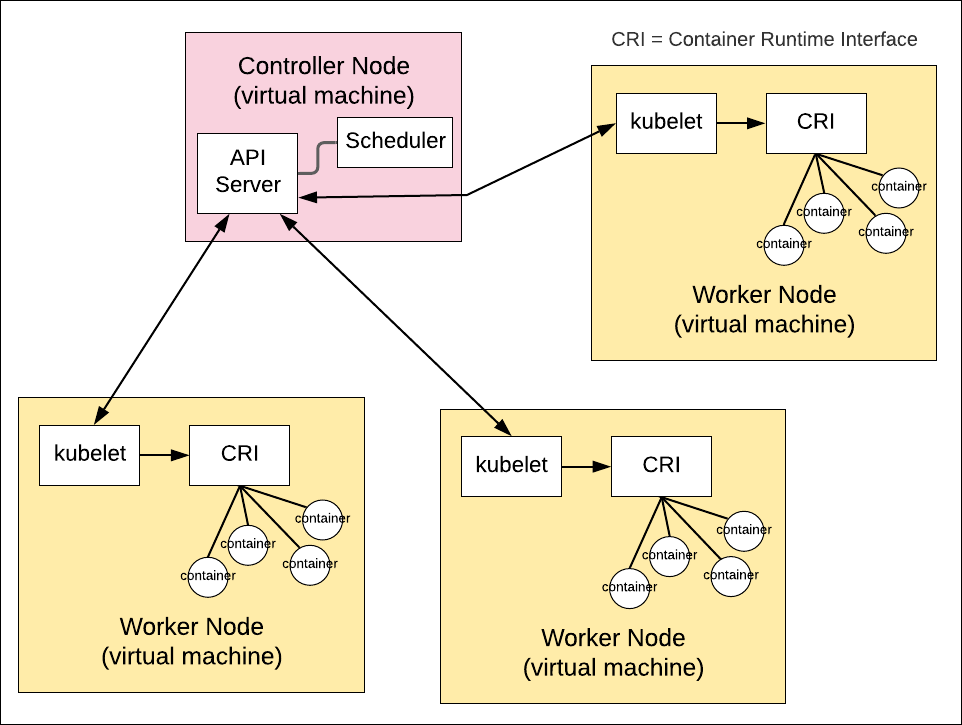 Figure 3: How kubelet realizes containers on a Kubernetes node

What is RBAC and how does it relate to Kubernetes?

What is the difference between a StatefulSet and a DaemonSet?

A DaemonSet is an API object in which a copy of a given pod is run on each node in a Kubernetes cluster. Logging is a good example of the usefulness of a DaemonSet. A logging system typically uses an application called a collector to gather all the log information generated on each machine, and then forwards that information to a central location where it’s aggregated. Configuring a log collector as a Kubernetes DaemonSet ensures that the collector is run installed on each node.

What is a sidecar and when is it best to use one?

When you need to provide additional features or services to a container in a versatile, low-latency manner, the sidecar pattern is a good way to go.

How can you make it so that a pod runs on a specific node?

Use node affinity. Node affinity is a Kubernetes deployment technique in which a node is assigned an arbitrary label, and then pods are configured to be assigned to that node according to the label created.

For example, this following code snippet creates an arbitrary label, nodelocation, and assigns the value usa to the node named worker-01:

The manifest file shown below describes a Kubernetes deployment in which all the pods created for the deployment are assigned to any node that has a label with key-value pair nodelocation=usa.