Although Barry Burd may not be developing software on his recently acquired OnePlus 2 Android smartphone, he is reviewing it for TheServerSide in a three-part series. This is part three, which covers the software and provides an overall review of the phone. Part one provides an overview of the device and a short history of how the OnePlus 2 mobile phone found itself into Burd's hands. Part two looks at the phone's hardware.

The OnePlus 2 mobile phone runs OxygenOS, a version of Android that, for one reason or another, has its own name. At first, I was wary of anything that's not simply named "Android." I've had experience with some non-standard versions of Android, and I haven't been pleased. One non-name-brand tablet has its own app store with a selection of apps that's minimally acceptable. My Kindle Fire tablet has the Amazon Appstore instead of Google's Play store. Amazon's Appstore has fewer apps than Google Play -- one-third the number of apps, according to a recent count. I can side-load some apps onto the Fire tablet. But side-loading, when it works, is cumbersome. For a long-time Android user, Amazon's Fire OS interface, with options in unfamiliar places, can be confusing. And often, when I'm looking for useful buttons and icons, I find advertisements instead.

My concerns about OxygenOS were allayed when I started using the device. The phone's settings screen lists both OxygenOS and Android versions. On the Home screen, I found a familiar-looking Google icon, and when I tapped the icon, I saw a group of apps that included Gmail, Google Maps, Google Photos and other Google goodies.

OxygenOS is an OHA version of Android. In fact, OxygenOS is as close to familiar, vanilla Android as any system that I've used. After a day with the OnePlus 2 mobile phone, I wondered why OxygenOS is called anything except plain-old "Android." Unfortunately, I allowed myself to get stuck doing a search for an answer to this question. I clicked a link to have an online chat with OnePlus 2 tech support, and I was 65th in the queue (a new record for me). I was able to multitask during the 40-minute wait for a representative to chime in, but the representative didn't know what puts the Oxygen in OxygenOS. After calling a few other companies and asking some knowledgeable friends, I gave up on this quest. Be it branding, a legal agreement or some secret software sauce, the OnePlus 2 mobile phone runs OxygenOS and this fact is of little concern to the average user.

OxygenOS has a few features that you don't find on your grandmother's Android phone. One of them is an added Home screen panel called the Shelf -- a customizable header image and a bunch of widgets. Figure 1 shows my phone's Shelf. The header image has a "Good night, Barry" caption. The Google Play Music and Mobile Bookmarks widgets are below the header image. 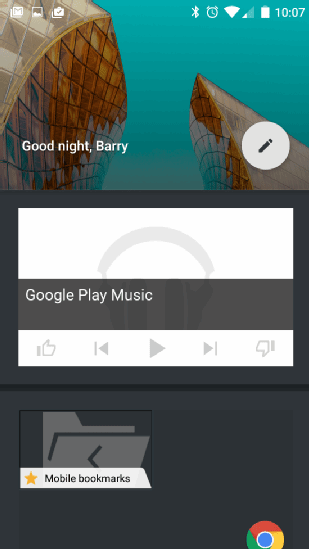 The Shelf is scrollable, so you can add many more widgets. Figure 2 shows a few of the widget choices. 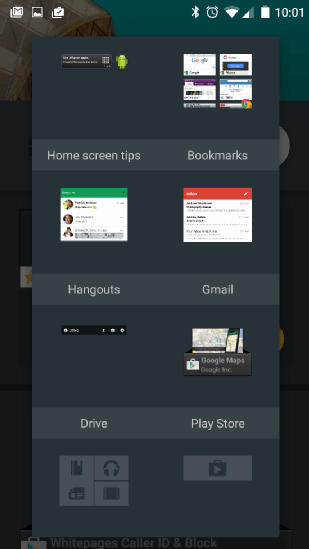 The Shelf might be great for some users, but in my experience, alternative launch screens are seldom worth the trouble. The habits I've learned from several years of standard Android use are built into my right hand's muscle memory. Until I find an alternate launch screen that's leaps and bounds better than the standard UI, no alternate launch method will get my full attention.

For me, the only rough spot in the phone's user interface is the default dialer. The dialer's options aren't always intuitive, and an easy-to-use dialer is a must-have feature. When I answer a phone call, I shouldn't have to fumble around to find the button that toggles the speaker. Once, while I was running an app, I got an incoming call and I couldn't find the screen's Answer button. At that point, I decided to install a third-party dialer. Fortunately, Google's Play store has plenty of dialers to choose from. In the long term, I could probably have become accustomed to the OnePlus 2 dialer's interface, but now I'm comfortable with the alternative dialer.

I like the OnePlus 2 mobile phone. It's not perfect. But no phone is perfect, and my overall impression is very favorable. Things look particularly good when I consider the phone's price and compare it with the prices for similar hardware.

At this point, a typical review ends with a balance sheet -- a capsule summary of the device's pros and cons. Those summaries are nice, but in this article, I replace my own summary with someone else's thoughts. During this year's JavaOne conference, at a bar in San Francisco, I saw someone using a OnePlus 2. I asked him what he thought of his phone. The bar was noisy and I couldn't hear his answer, so I asked him to scribble some pros and cons on the back of a business card. He wrote the list that Figure 3 shows. 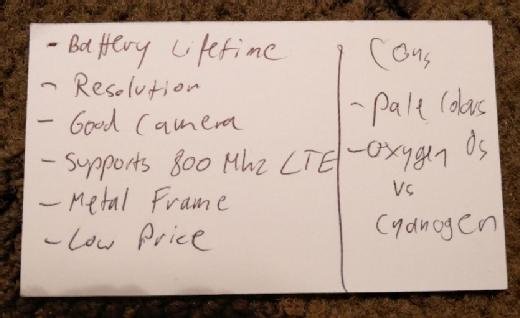 So, that's the summary. I should formally credit the fellow who scribbled this nice summary, but the bar was so noisy that I didn't get his name. One way or another, I extend a sincere, anonymous "thank you" to this kind man, whoever he might be.