Maven and Gradle tend to get all of the big headlines these days when it comes to the world of Java builds, but Apache Ant should never be discounted. With ongoing updated to the code base and an established history of reliable use in a vast array of Java projects, Ant will remain a popular build tool for years to come. As such, the ability to integrate Apache Ant with Jenkins and other popular DevOps tools is of key importance. In this quick tutorial, we’ll show you how to run Apache Ant builds with Jenkins.

To follow this tutorial, you will need the following tools installed:

This tutorial was created with Jenkins and Ant installed on an Ubuntu 20 server, but the steps are the same for both Windows and MacOS.

Build jobs in Jenkins with Ant

There are three different approaches to build Java projects in Jenkins with Apache Ant:

This article will focus on options 1 and 2. The second part of this article examines how to perform a Jenkins Docker Ant build.

Jenkins Ant and the web UI

The Jenkins Ant plugin is part of the default installation, and as such is available to any Freestyle project created in the CI tool.

Specify the following GitHub URL as the Git repository location and point to either the master or main branch:

Run the Jenkins Ant build job and the source code will be pulled from GitHub, the tasks will run, and the application will be compiled, tested and packaged as a WAR file. 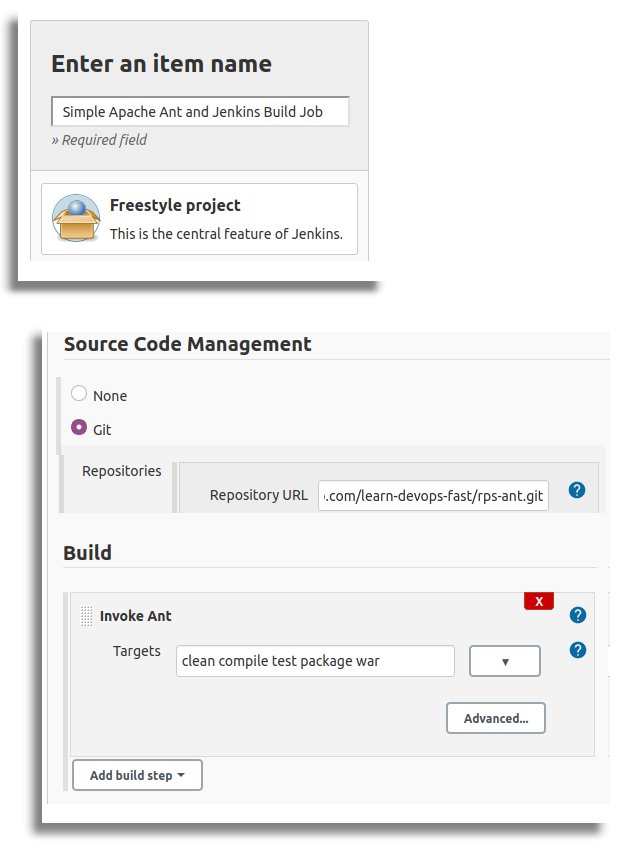 Here is how to use the Jenkins Ant plugin to build Java projects.

As an alternative the the web interface, many developers to code their builds as a Jenkins Ant pipeline. If a pipeline build was chosen instead of a freestyle project, the following Ant based Jenkinsfile be sufficient to build the project:

When this pipeline runs, the effect is exactly the same as with the Jenkins Ant freestyle project. The code will be pulled from GitHub, the Ant tasks will run, and the required artifacts will be assembled ands stored in the Jenkins workspace for when they are required.