There’s an interesting change packaged inside the CDI 4.0 release that will change the way you think about the API.

Version 4.0 of Jakarta Contexts and Dependency Injection (CDI) changed the specification structure. Previously, the CDI spec included a CDI Core part, which was the basis for the CDI SE and CDI EE implementations.

But in 4.0, the CDI Core is restructured into two parts: CDI Full and CDI Lite. CDI Full provides the entire specification as well as a smaller subset of it, called CDI Lite.

The restructuring is a significant change at the implementation level, but developers who maintain existing applications won’t even notice the change. Apps that use the prior CDI specification are unaffected by how the Core CDI has been restructured.

If you’re a Jakarta EE developer, the CDI EE part of the specification — which is what Jakarta EE application servers implement — still requires the entire Core CDI. So for both enterprise and standard edition developers, the change will be completely transparent.

Difference between CDI and CDI Lite

The key difference between the full CDI and CDI Lite is that you can implement the lite spec in a build-time oriented manner.

CDI Lite contains the most useful features of CDI Full. It allows many dependency-injection frameworks to implement this highly functional subset of CDI Full.

AtInject, also known as Java Specification Request (JSR) 330, is a good example of how CDI Lite can be useful when a project requires build-time orientation. 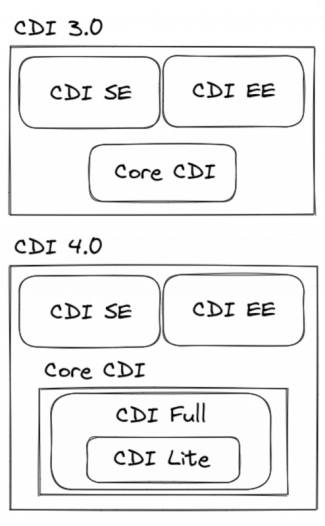 AtInject has very popular implementations of both runtime and build-time oriented architectures.

CDI Lite is carefully designed to support these build-time capabilities.

If it sounds like a big chunk of CDI functionality was removed, fear not. CDI Lite is a versatile framework, and it preserves all but a few Core CDI capabilities. Those removed features includes:

All other Core CDI functionality is part of CDI Lite, notably:

The only significant feature missing in CDI Lite is the portable extensions mechanism. There are two main reasons for this:

Instead, CDI Lite comes with a new extension API called build-compatible extensions. This API doesn’t use reflection at all. Instead, it uses a new language model that can be implemented on top of reflection or other representations, such as javax.lang.model or Jandex. It also doesn’t require a running CDI container.

For compatibility reasons, there’s still a single Java archive file that contains all the APIs, so you don’t have to worry that CDI Lite will rename packages. The Javadoc for the CDI types indicates whether they’re available in CDI Lite or CDI Full. The language model API is an exception. Some other Jakarta EE specifications expressed interest in this API, so that is shipped as a separate JAR file and may eventually be split out of CDI into another specification.

Some relatively small changes in CDI 4.0 deliver other quality-of-life improvements.

If you ever needed an automated process to look up beans, you’ve probably come across the Instance API. It lets you iterate over beans of a certain type with certain qualifiers, but it also instantiates all beans which isn’t always desirable. The Instance Handle API allows you to iterate inspections of beans’ metadata without instantiation. As a result, programmatic bean lookups should no longer require access to the BeanManager.

Finally, in CDI 4.0 developers can apply the @Priority annotation on stereotypes. This enables useful functions, such as the ability to declare a common @Mock stereotype, which would be a globally enabled @Alternative.

There are some breaking changes too. For example, CDI 4.0 removes several deprecated APIs:

Weld remains a compatible implementation in CDI 4.0, and a beta release is already available. It also implements the build-compatible extension API, using translation to portable extensions. The Eclipse Open DI project, which is based on Micronaut, is currently working on a CDI Lite-compliant, build-time oriented implementation. ArC, a subproject of Quarkus, is also working to become CDI Lite-compliant.

Ladislav Thon works for Red Hat in Czech Republic, is a contributor to MicroProfile, and a committer to the Jakarta CDI specification.