If you don’t already have one, it’s very easy to create a GitLab repository.

The GitLab project and repository used in this example is name gitlab-made easy. It’s public and contains a README file. 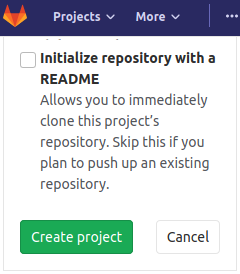 You can add a README when you create GitLab projects.

After the project is created, the next step is to open an Ubuntu terminal window and issue the ‘git clone’ command. But first, you will need the URL of the repository. A developer can find the URL by clicking on the big blue clone button on the landing page for the repository in the Git GUI. Copy the HTTP URL and then open an Ubuntu terminal window.

From the Ubuntu terminal, call the ‘git clone’ command and append the GitLab repository URL. 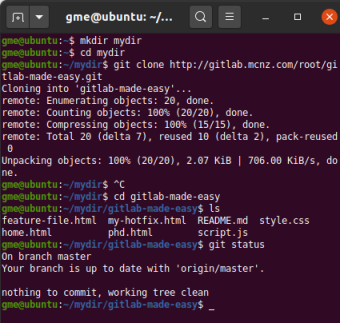 Clone a GitLab repository with Git

If  ‘git clone’ doesn’t work, you might not have Git installed locally. Developers can solve that problem by issuing a ‘sudo apt-install git’ command. After the installation completes, simply re-issue the ‘git clone’ command to clone the GitLab repository.

After you successfully clone the GitLab repository, navigate into the newly created gitlab-made-easy folder. Inside you will see a README file, which verifies that the clone operation was successful.

Next steps would include creating new files in your Git working directory, adding those files to the index, issuing commits, creating GitLab branches and deleting those branches when they become stale. With the GitLab repository clone locally installed, the entire world of Git-based version control is now at your fingertips.

While we use an on-premises, self-hosted GitLab installation in this example, all the steps here apply equally to the cloud-based GitLab offering as well.