Lenovo ThinkPads are one of the most commonly used laptops for enterprise software developers. They are well made, have a reputation for being durable and capable of taking a good deal of abuse, they are as easy as any other laptop on the market to perform upgrades on, and most importantly, they have the built in TrackPoint, also known affectionately in the industry as the pointer stick, clown nose or the red nub.

Those who have mastered the Lenovo TrackPoint know there is no more efficient way to point and click. All other solutions of integrating a keyboard and mouse into a laptop keyboard pale in comparison, as the fingers need to be taken away from the keys in order to move the mouse around the screen. With the trackpoint, only the index finger needs to move off the keys, and even then, it is never far from its natural resting place of the letter ‘f’ or ‘j.’

For the ThinkPad lovers out there, the Christmas gift they’d never expect but would love to receive is a standalone keyboard with a built-in TrackPoint. With the wired USB cable option, the TrackPoint keyboard can connect to any desktop and bring the ThinkPad’s ease of use to any traditional, standalone computer. 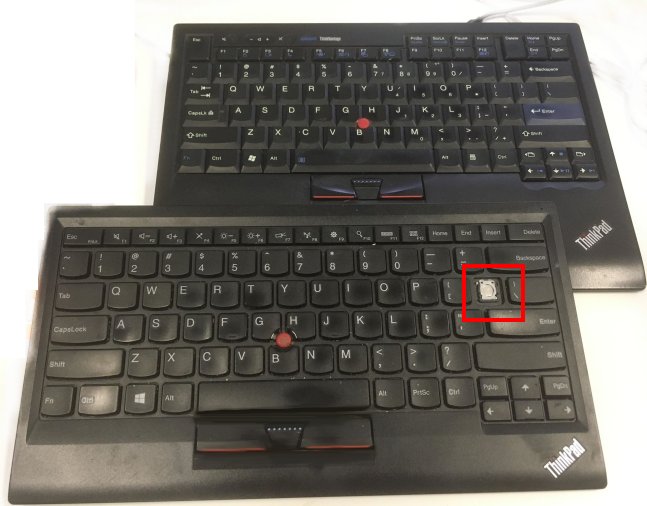 Keys falling off is my only TrackPoint keyboard complaint.

The alternate Bluetooth-enabled TrackPoint keyboard can similarly control desktops and laptops, but can also connect to a smart TV or Android TV Box. It would give the user complete mouse and keyboard control of the device instead of the generic up-down-left-right buttons with a remote control.

I have purchased several of these keyboards myself and I love them. And whenever a fellow ThinkPad user spots them, their eyebrows raise as their interest piques. They recognize the keyboard’s value immediately, wanting to know where to get one and how much they cost.

As for where to get them, I’ve never seen them stocked in a big box computer store like Best Buy or Frye’s. If you want one, you’ll need to order it online. The Lenovo website lists a wired USB keyboard with TrackPoint for $59.99, which isn’t a prohibitive price at all.

However, despite all the aforementioned praise, I do have two small beefs with the TrackPoint keyboard. First is the fact that there are no ergonomic variations that allow for the user to bend their wrists. It’s only available in a carpel-tunnel inducing, square-on approach.

The other qualm I have with the newer versions is with the key quality. In each of the newer keyboards I’ve purchased, the keys start to fall out rather quickly. In fact, I’ve found the exact same problem with modern Lenovo Laptops that use the same keyboard format.

My very expensive Lenovo Carbon X1 has already lost the ‘E’ and ‘Ctrl’ keys, while my Lenovo keyboard lost the curly right brace after only a few months, which makes writing Java code more difficult than it should be.

The TrackPoint keyboard isn’t for everyone. Advanced level software developers will swear by its benefits, but casual users tend to be less impressed. But if you do have a ThinkPad user in your life who has learned to love the laptop’s layout, put a standalone, TrackPoint keyboard under the tree for them this Christmas. I assure you: they won’t be disappointed.