4 Steps to clone GitHub over SSH

To perform a GitHub clone with SSH keys in Git, simply follow these steps:

These steps may sound a little daunting at first, but the whole process can be completed in less than five minutes, as you can see from the video above.

On Windows, you can create GitHub SSH keys with the open source tool PuttyGen. On Ubuntu, or even on Windows if you have the Windows Subsystem for Linux (WSL) service installed, GitHub SSH key creation is even easier. You just invoke the ssh-keygen command in Windows PowerShell or the Ubuntu Terminal window.

The following directory listing operation shows the public and private SSH keys in the user’s .ssh directory on Linux:

To configure SSH with GitHub, you must store a copy of your public SSH key on GitHub.

When you perform a clone of a GitHub repository over SSH, the public key held by the remote server is compared against the private key stored locally in the operating system’s .ssh folder. If there’s a match, the GitHub clone over SSH proceeds. If not, the connection fails. So, for any of this to work, GitHub needs a copy of your public SSH key.

Open your public key, likely named id_rsa.pub, with a text editor and copy the contents. On Ubuntu, you could simply issue a cat command and copy the output from the Terminal window:

With the public key copied, log into GitHub and go to your account settings. A link exists for SSH and GPG keys. Click on this link, add a GitHub SSH key, paste the value of the public key into the appropriate field, and give your key a creative name. After this step is performed, you will be able to perform a GitHub clone with SSH keys in Git. 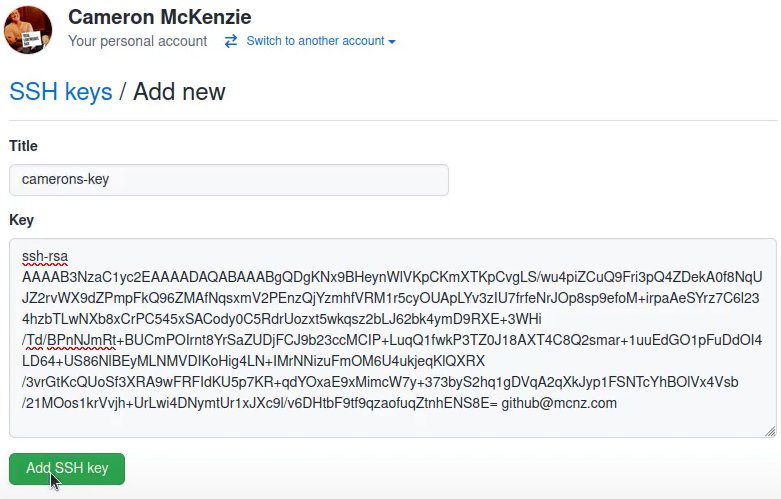 GitHub SSH key configuration requires the value of your public SSH key to be saved persistently on the GitHub server.

Each GitHub repo has a green Code button you can click to get either an HTTP, CLI or SSH URL that allows the repo to be cloned.

Copy your repository’s SSH URL and you’re ready to perform the GitHub SSH clone operation. The SSH URL for my spock-lizard-docker repository is as follows:

To clone GitHub with SSH keys, just open Windows PowerShell or an Ubuntu terminal and issue the Git clone command and specify the SSH URL copied from GitHub. Git will ensure that the GitHub clone operation uses an SSH connection.

You’ll encounter a warning about Git’s inability to validate the SSH key against a third party authentication service pauses the clone operation. This is expected. Simply type ‘yes‘ and the GitHub SSH clone operation proceeds.

Once the clone operation is complete, all subsequent interactions with GitHub take place over a secure SSH connection.

And that’s all you have to do to perform a GitHub clone with SSH keys in Git.