Git stash is a built-in command with the distributed Version control tool in Git that locally stores all the most recent changes in a workspace and resets the state of the workspace to the prior commit state.

A user can retrieve all files put into the stash with the git stash pop and git stash apply commands. Git stash acts as a mechanism to locally version files without those versions being seen by other developers who share the same git repository.

The git commit and git stash commands are similar in that both take a snapshot of modified files in the git working tree and store that snapshot for future reference. The key differences between the two are as follows:

The git stash and the git reset hard commands are similar, as both commands will revert all files in the working directory back to the state at the point of the previous commit. Differences between the two include:

The git stash and git stage commands can be confused because of their similar names, but the two commands are different. The git stage command simply adds files to the git index. This allows those files to be part of a filesystem snapshot when a git commit occurs. This is a different construct as compared to git stash. 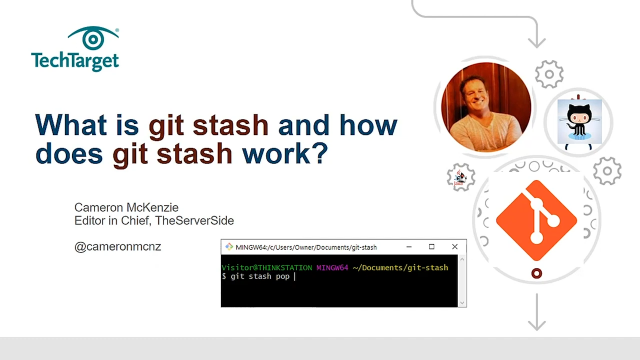 The most common git stash options include:

The git stash save command is deprecated in favor of git push.

The latest git stash is stored in the hidden folder .git/refs/stash. All other stashes are found in the reflog of this folder.

The git stash command is a utility that allows a developer to temporarily save modified files. However, it is a utility that should only be used occasionally because it only involves local repository history. Code stored in a local stash is not visible to other developers, nor is it replicated to other git repositories like GitHub or GitLab when a push occurs.

It's a better option to create development branches and commit regularly to these branches rather than a stash. These branches will replicate to other team members after a push and survive any local file system failures. Use of the stash makes the most sense when the changed files are shelved only temporarily and the intention is to come back within a short timeline.