"What is an REPL?" you ask. An REPL is a command-line tool for quickly running statements.

The acronym REPL stands for Read-Evaluate-Print-Loop. Many languages (most notably, the scripting languages) already have REPL tools. Java has a few third-party REPL tools, including Java REPL and BeanShell. But with Java 9, to be released in 2016, the SDK will come with an official REPL named JShell (and codenamed Kulla).

In the formal proposal for JShell (JEP 222), the project's members describe the motivation for creating a Java REPL:

Immediate feedback is important when learning a programming language. The number one reason schools cite for moving away from Java as a teaching language is that other languages have a "REPL" and have far lower bars to an initial "Hello, world!" program.

In fact, in recent years, colleges have moved away from Java as a first language in favor of Python , in which print("Hello, World!") is a complete, executable program. But the new JShell REPL isn't only for students. Developers can use JShell to do a quick check on some complex programming logic.

The formal proposal for JShell emphasizes that the REPL stays faithful to Java, and does not implement a brand new scripting language:

… if X is an input that JShell accepts (as opposed to rejects with error) then there is an A and B such that AXB is a valid program in the Java programming language.

You can try it

To get a sense of the way JShell works, start by installing the Java 9 Early Access JDK. Then download the Kulla 0.710 Jar file from cloudbees.com. Run the REPL tool by typing a command of the following kind in a Terminal or Command Prompt (cmd) window:

Remember to point to the locations of Java and the Kulla Jar file on your directory system, and to use the name of the Jar file that you downloaded from cloudbees.com:

For example, on my Windows computer, I type

Once it's running, you can converse with JShell as if you're in the middle of a bona fide Java class. The following is a transcript of one of my JShell sessions: 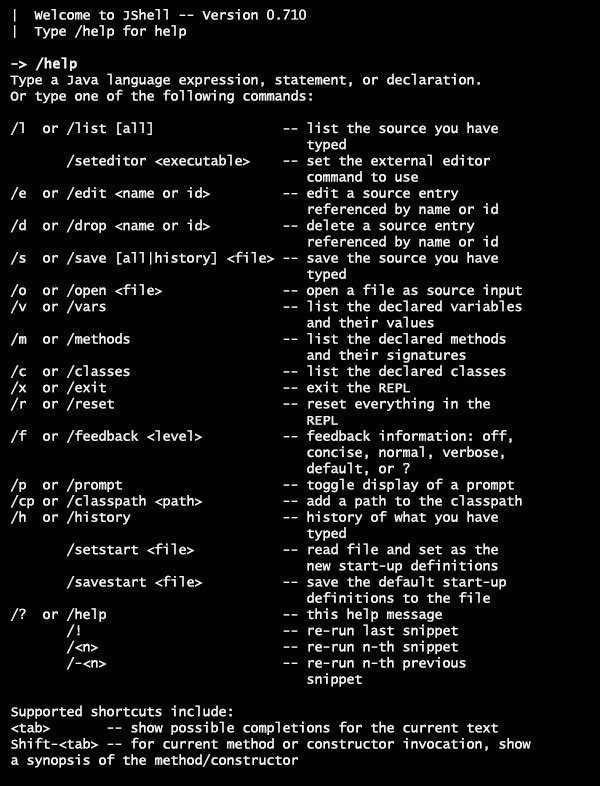 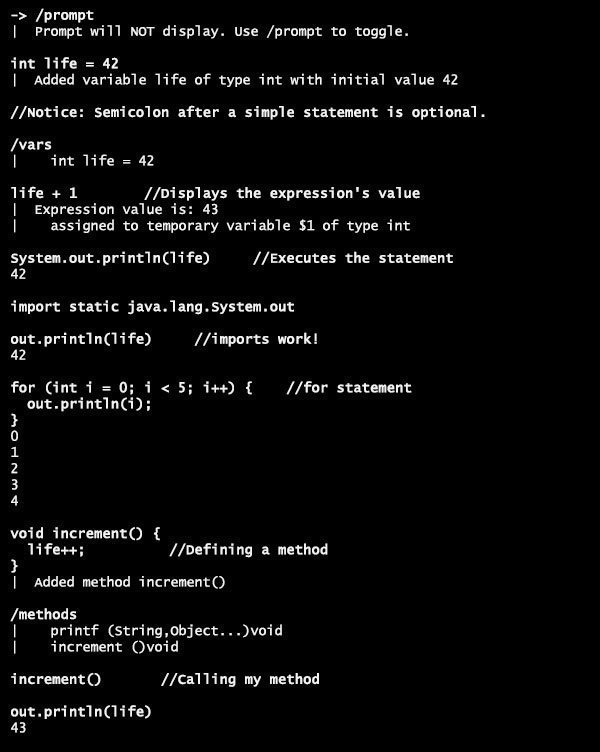 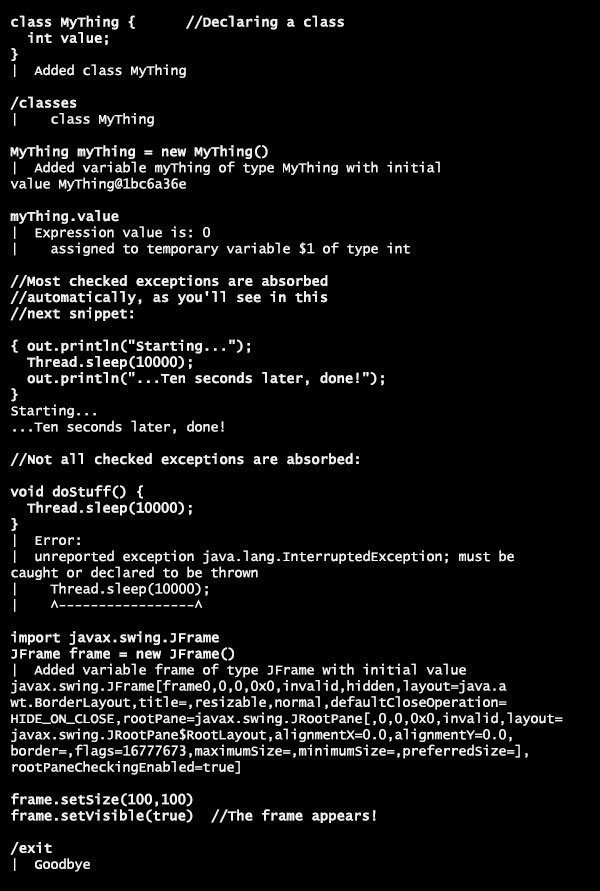 As the following example shows, you can save your work during a JShell session, and reopen your work in the same session or during a subsequent session: 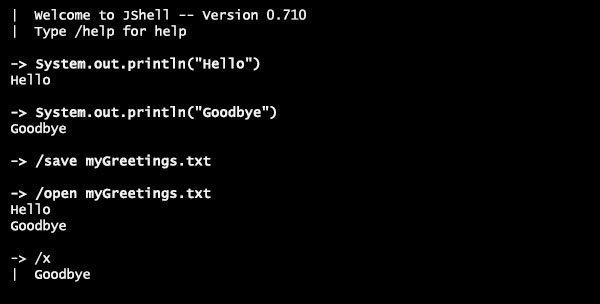 In the example above, the file created by JShell (the myGreetings.txt file) is a simple text file:

You can use the /open command to scoop up an entire Java class -- a class that you declared in Eclipse, IntelliJ IDEA, or in any text editor.

Dependencies in class definitions are handled gracefully, as you can see from the following example: 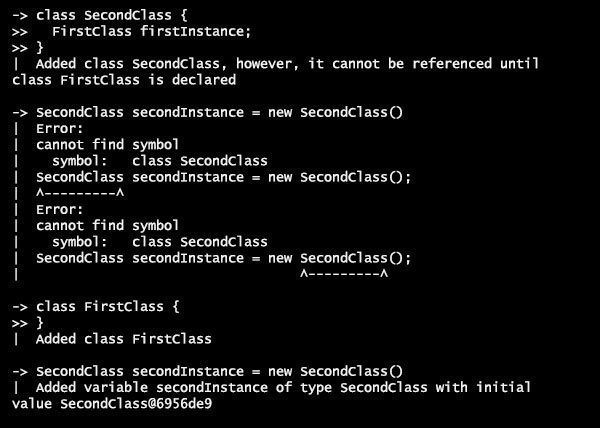 JShell lets you redeclare and edit your variables, methods and classes. The following example illustrates the redeclaration and editing features:

At this point, JShell launches a tiny text editor. I change the text in the editor: then I click Accept and Exit.

These redeclaring and editing features are convenient, but they're not without risks. The following is an example in which there are no surprises: 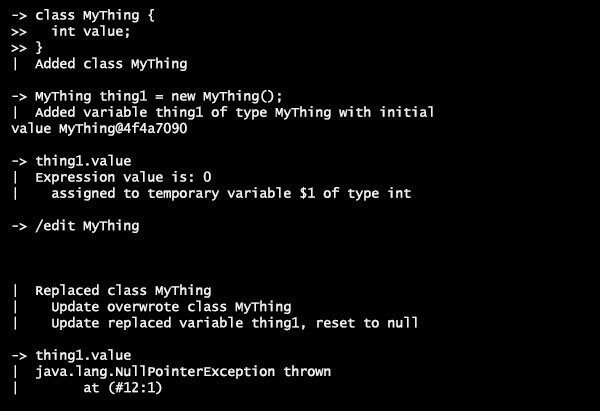 The example ends with a NullPointerException. Having changed the field type in the MyThing class, the previously declared instance of MyThing no longer exists. In my view, that's a fairly safe outcome.

But notice what happens when I make a less drastic change to the MyThing class: 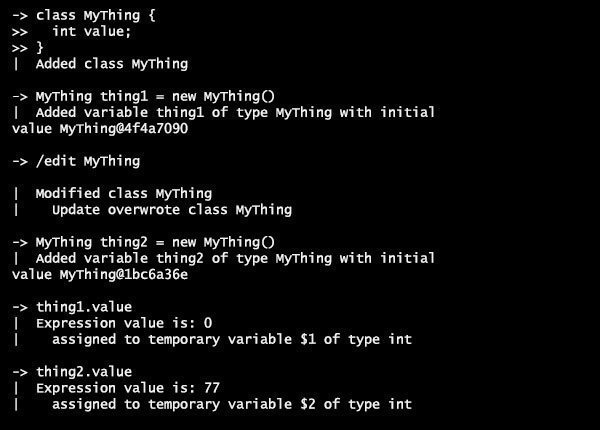 When you bring home a gizmo with some assembly required, it helps to read the instructions. And the same holds true for JShell. When I change the MyThing field from an int to a double, JShell displays a Replaced class MyThing notification and reminds me that Update replaced variable thing1, reset to null. But when I simply change the field's initial value, JShell says Modified class MyThing and says nothing about thing1.

Sure enough, the formal proposal for JShell distinguishes between adding, modifying and replacing a code snippet:

As an author and educator, I'm excited about using JShell in my work. And for Java developers, JShell presents new possibilities in debugging and exploratory programming. At long last, the edit-compile-run-debug cycle is no longer a stumbling block for writing good Java code.