I don’t know anyone who likes investigating a Java heap dump.

They can be massive — literally multiple gigs in size. They contain so much information that identifying the cause of a JVM memory leak can be like searching for a needle in a haystack. 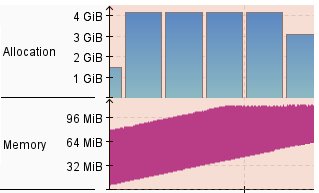 And the fact that inspecting a Java heap dump from a production system might have you unwittingly in possession of personally identifiable information that could, if mishandled, get you in trouble with various privacy makes the entire file feel radioactive.

I’d say inspecting a Java heap dump simply wasn’t worth the trouble, if it wasn’t for the fact that doing so is pretty much the only way to fix Java memory leaks in your JVM. Or at least it was the only way until the Java Flight Recorder introduced the Old Object Sample event.

When a recording is started, a fixed number of objects from the Java heap are tracked. Tracked properties of the Java heap objects include:

You can adjust the number of objects on the Java heap tracked by Flight Recorder by adjusting the old object queue size:

When a tracked object on the Java heap is garbage collected, it’s removed from the sample and a new one added. Over time, objects that have causes a memory leak are more likely to get tracked. The longer the JVM Flight Recorder runs, the more likely memory leak inducing objects are to be tracked.

Furthermore, the longer these objects that cause a Java memory leak exist, and the more memory they consume, the more glaring their existence will be when it comes time to examine the JVM Flight Recording in Java Mission Control.

Furthermore, the rules engine within Java Mission Control is capable of identifying which long-running Java heap objects are most likely to be contributing to a JVM memory leak.

Notice how after a Java Flight Recorder run on a sample application designed to trigger a memory leak, Java Mission Control immediately indicates that an object monitored through the Old Object Sample event is likely the culprit:

The live set on the heap seems to increase with a speed of about 192 KiB per second during the recording.
An analysis of the reference tree found 1 leak candidates. The main candidate is java.util.Hashtable$Entry[] Referenced by this chain:

Live Objects on the Java heap

Along with the initial automated analysis, Java Mission Control will provide a list indicating the size of all active items on the heap, along with a list of all live objects in memory. As you can see, without the need to resort to a JVM heap dump, a Java memory leak has been easily identified.

JVM Flight Recorder and JDK Mission Control provide a variety of advanced features that allow developers to troubleshoot Java memory leaks without the need to inspect complicated Java heap dumps. Get familiar with these powerful profiling and monitoring tools, and troubleshooting Java performance problems will cease to be a cumbersome task.