When I was working through a few of Marcus Hirt’s Java Flight Recorder tutorials, I was surprised by how much the JVM performance cost is affected by the boxing and unboxing of Java primitive types.

As every Java developer knows, there are eight primitive types in Java:

Primitive types represent the simplest, most direct way to represent data in code. Even the most complicated classes in Java can be flattened down to nothing more than the set of primitive data types they represent. But primitive types aren’t objects, and that presents a problem.

For example, all the collection classes in the JDK hold data as objects. If a developer has a set of int values they want to store in an ArrayList, it can’t be done. Unless, of course, they use a corresponding wrapper class or take advantage the autoboxing in Java feature.

Examples of autoboxing in Java

For every primitive type, there is a corresponding wrapper class:

Historically, if developers wanted to store a set of doubles in a collection class, they’d have to convert from the primitive type to the wrapper class:

I always assumed that when Java introduced primitive type boxing and unboxing, JVM level optimizations to address any Java autoboxing related performance issues were implemented as well. I assumed that moving between wrapper classes and primitive types was a relatively smooth operation when it came to clock cycles, garbage collection and memory consumption.

I couldn’t have been more wrong.

Here’s the highly contrived use case, which is largely inspired by Marcus Hirt’s JMC examples.

First, we create a simple component that acts as a wrapper class for an int value. The class is named SnoopInt:

We then have a runnable class that shoves one million primitive type int values into a map.

There’s a great deal of autoboxing Java primitive types involved, so I named the class MikeTyson:

A quick profiling of this program with Java Flight Recorder and the JDK Mission Control Eclipse Plugin triggers a red warning flagging Primitive to Object Conversions as being problematic. The autoboxing is causing a performance problem. 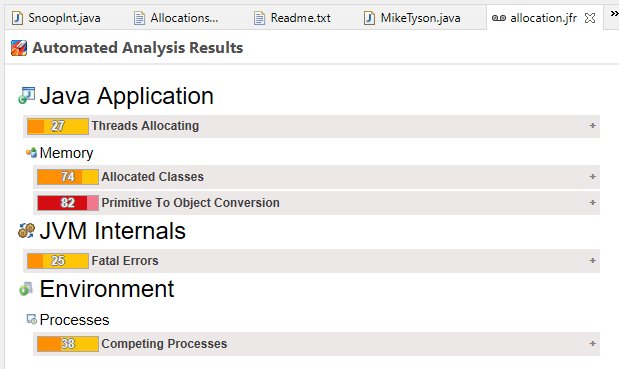 How do you solve the Java autoboxing performance problem?

Developers can fix the problem by changing only a few lines of code. If the Integer reference type is used throughout the application, all the garbage collection problems will go away.

The constructor of the MikeTyson class gets a small change:

And the custom wrapper class gets updated to use the Integer reference type as well:

Monitor and profile with JFR and JMC

That’s why it’s important to constantly profile your applications with tools like Java’s JVM Flight Recorder and the JDK Mission Control tool. Assumptions aren’t bad, so long as a mechanism exists to validate them, as this Java autoboxing performance example clearly demonstrates.