When a portlet is placed on a portal page, the data stored in the PortletSession of this portlet is not shared with any other portlets on the page, or anywhere else in the portal. This default behavior is known as PORTLET_SCOPE, and has been the way the PortletSession object has behaved for years. However, developers have done nothing but moan and groan about the fact that it is incredibly difficult to share information between portlets that exist within the same portlet application (think WAR file), so with the JSR-168 portlet specification, the Java Gods introduced the concept of a shared, APPLICATION_SCOPE, for the PortletSession, which is a concept that has carried on in to JSR-286 as well. When a portlet shoves an object into the PortletSession, and specifies APPLICATION_SCOPE as the visibility of the data, any portlet that is part of that same portlet application can obtain that data by providing the appropriate key when making a call to the PortletSession's getAttribute method.

TheJSR-268 API defines two constants, or should I say final static variables, in the PortletSession class. These two constants are named APPLICATION_SCOPE and PORTLET_SCOPE, and represent the numbers 0x01 and 0x02 respectively.

Class diagram of the PortletSession 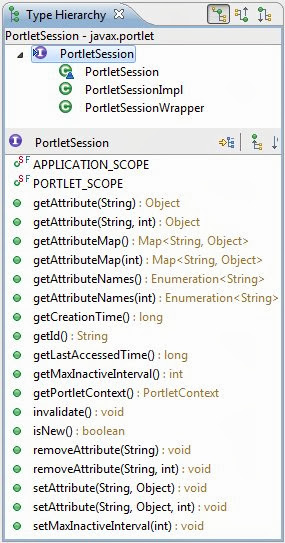 "The PortletSession interface provides a way to identify a user across more than one request and to store transient information about that user.

A PortletSession is created per user client per portlet application.

-Description of the PortletSession from the IBM/Sun Portal API JavaDocs

Our SimpleSessionPortlet, defined in Fig. 5-1, places a hitcount into the session using the key timesvisited. To allow another portlet to access this hitcount, we could change the scope of the timesvisited key to APPLICATION_SCOPE, and have a second portlet, which we will name SessionViewerPortlet, pull the key out of the APPLICATION_SCOPE.

Now that the key named timesvisited is stored in the scope of the application, both the SessionViewerPortlet and the SimpleSessionPortlet can share information through the PortletSession. But notice how the two portlets are out of sync, with one showing a count of 2, and the other showing a count of 3? Sadly, things do always go as planned when your application relies on the doView methods of various portlets to be processed in a certain order. This very issue will lead us into the next lesson on the action processing phase of a portlet. But for now, you can at least be happy that the two portlets are successfully sharing information through the PortletSession.