This content is part of the Essential Guide: Master Git basics and branch into DVCS

One of the most commonly misunderstood version control commands is git cherry-pick, and that’s a real shame because the ability to git cherry-pick a commit is one of the most useful skills a developer can employ when trying to isolate a software bug or fix a broken build.

What is git cherry-pick?

According to the official git documentation, the goal of a cherry-pick is to “apply the changes introduced by some existing commit.” Essentially, a cherry-pick will look at a previous commit in the repository’s history and apply the changes that were part of that earlier commit to the current working tree. The definition is seemingly straight forward, yet in practice there is a great deal of confusion over what exactly happens when someone tries to git cherry-pick a commit, or even cherry-pick from another branch. This git cherry-pick example will eliminate that confusion.

We will begin this git cherry-pick example with a completely clean repository, which means first you will create a new folder, which we will name git cherry-pick tutorial, and then issuing a git init command from within it.

With the git repository initialized, create five html files, and each time a you create a file, perform a commit. In each commit message, the commit number and the number of files in the working tree will be included as part of the commit message. In a subsequent step, where we cherry-pick a commit, it is one of these commit steps that will be chosen.

Here are the commands to create the five, alphabetically ordered .html files along with the git commands required to add each file independently to the git index and subsequently commit those files to the repository:

A note on the echo command

Delete and commit before the cherry-pick

We will now delete all five recently created files to clear out the working directory. A subsequent commit will be needed here as well.

To recap, five files were created, and each file created has a corresponding commit. And then all the files were deleted and a sixth commit was issued. A chronicling of this commit history can be concisely viewed in the reflog. Take special note of the hexadecimal  identifier on the third commit, which we will cherry-pick in a moment:

What happens when we git cherry-pick a commit?

Here is the command to git cherry-pick commit number 60699ba:

As you can see, only one file was added to the working directory, namely charlie.html. The files that were added to the repository in prior commits were not added, which tends to be the expectation of many users. Many users believe that when you git cherry-pick a commit, all of the files that are part of that branch, at that time of the commit, will be brought into the working directory. This is obviously not the case. When you git cherry-pick a commit, only the change associated with that commit is re-applied to the working tree. 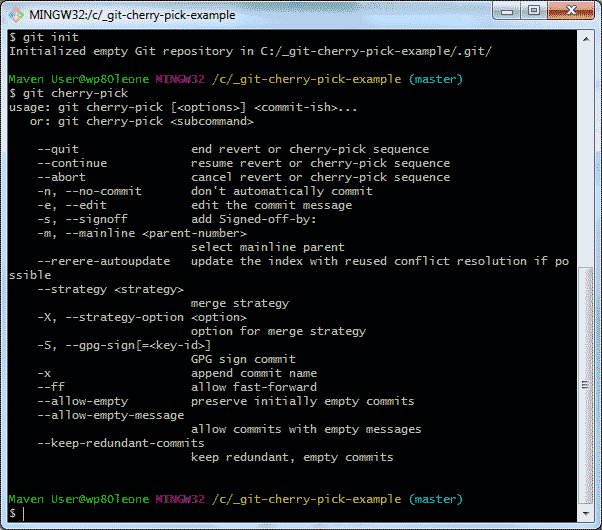 Here are the various options available when issuing a git cherry-pick for a commit.

It should also be noted that it’s not just the working tree that is updated. When you git-cherry-pick a commit, a completely new commit is created on the branch, as the following reflog command indicates:

When a developer encounters a problem in the repository, the ability to git cherry-pick a commit can be extremely helpful in fixing bugs and resolving problems in GitHub, which is why understanding how the command works and the impact it will have on the current development branch is pivotal. Hopefully, with this git cherry-pick example under your belt, you will have the confidence needed to use the command to resolve problems in your own development environment.