This content is part of the Essential Guide: Master Git basics and branch into DVCS

As with all git tutorials, this one will start off with a clean repository and an empty working directory, which means the first step is to create a new folder, which I will name git cherry-pic example. The next step is to issue a git init call from within that folder.

Preparing a branch for a git cherry-pick

With the repository initialized, the next step is to create three new files, adding a commit after each individual file is created. Since the repo was just initialized, all of this will occur on the master branch.

We are about to git cherry-pick from another branch, and specifically, we will be pulling in the second commit, but before we do we will delete all of these files and perform a commit to put the master branch back into an empty state.

Issuing a git reflog command will show the rich commit history of the master branch. Note the hexadecimal id of the second commit, 63162ea, as this is the one we will use when we git cherry-pick from another branch.

Switching to a feature branch

We will now create and move development onto a new branch named feature.

We will then create one file named zip.html and commit this file in order to create a small history of development on the feature branch.

How to git cherry-pick across branches

The id of the bowie.html commit was 63162ea, so the command to git cherry-pick is:

The output of the command to git cherry-pick from another branch is a single file being added to the current working tree, namely the bowie.html file. The directory listing command issued above shows two files, the zip.html file and the bowie.html file, indicating that the only change to the working tree was the addition of the second file.

As you can see from this example, when you cherry-pick, what is returned is not the entire state of the branch at the time the commit happened, but instead, only the delta between the commit that happened and the state of the git repository prior to the cherry-picked commit.

It should also be noted that any time you git cherry-pick from another branch, a new commit gets registered in the branch history, as is evidenced by the following reflog: 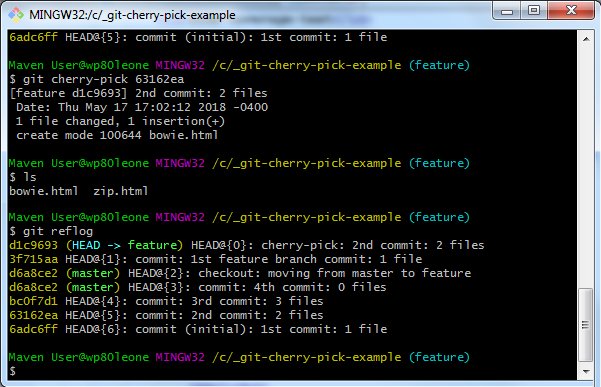