Spring 3 provides the ability to use a Java based configuration file, as opposed to using those monolithic XML configuration files that everyone hates. However, it doesn't have to be a complete "annotations vs. xml" debate, as you can easily combine both approaches.

We've updated our Spring, Spring Boot and Spring MVC tutorials. You might want to check these newer links out...

TheServerSide has been updating its resources in terms of the Spring framework, Java EE contexts and various different approaches to inversion of control (IoC) and dependency injection (DI). Check out these newer resources on the topic:

So, this would be the goal:

Notice how both the fooBean and barBean are pulled from a common beanFactory, despite the two beans being configured in different configuration resources? Here's the full Java based configuration file, which only specifically describes the creation of the fooBean:

And that's it! When the main method of the XmlAndAnnotations class runs, both the fooBean and barBean will be loaded from two separate Spring configuration resources! 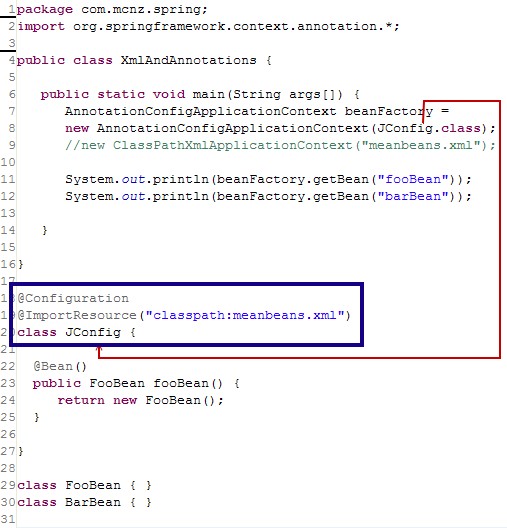